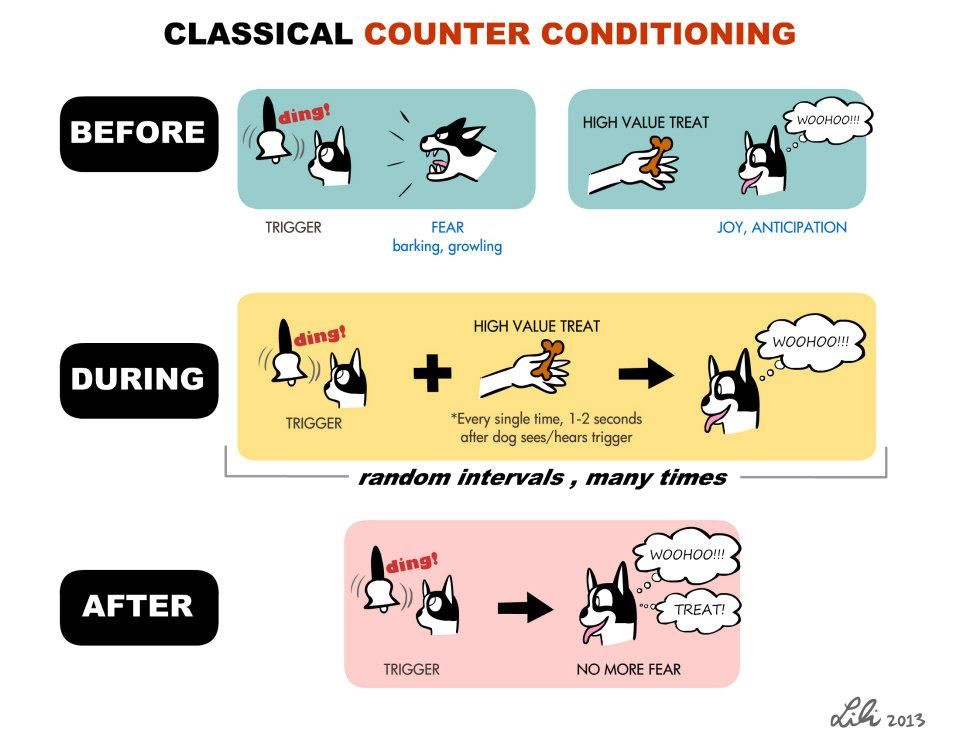 Now in this example, the bell had no value or meaning until it was paired with the steak. We can use this same principle to change our dog’s reaction to other stimulus, even ones that already cause a certain behavior. Lets break this down further. A stimulus, say a fire hydrant, causes our dog to spook, maybe bark, run away. This particular dog enjoys hot dogs and has a pleasant reaction to them. So what we are going to do is pair the hot dogs with the fire hydrant, slowly over time. We are conditioning the dog to respond to the hydrant the same way that he responds to the hot dogs. We are conditioning a behavior counter to the old behavior.

How to go about this: First, the key is to go slow. Do not force your dog to interact with the object of his fear until he is ready. Force and flooding can work in some cases but in extreme fear you are only releasing more fear neurotransmitters and hormones, making the memory of FEAR even greater. So go slow.

Start by having a good amount of high value food ready for your dog. Start at a far enough distance away from the object that the dog does not react. Once the dog notices the object mark and reward with food. Repeat again and again and again making sure to never progress into barking or shying away. Should your dog bark, correct that state of mind. We won’t allow the dog to continue to practice those neural pathways of barking, we stop them. Create more space and continue to reward for looking at the object then looking back at you.

Our dog is now looking at the object, the fire hydrant, and back at our handler. Keep it SHORT to start. Lots of these sessions are key. Make sure the dog recognizes the object before you mark with yes and then reward. We are rewarding for looking at the object without barking. Get closer as your dog gets more comfortable. Keep up the energy level and encourage your dog if they try to investigate on their own.

Finally, I’m going to include one of my real life examples of counter conditioning. I purchased a German Shepherd for work that ended up being terrified of trash cans. He would spook and run away every time he saw them. Now no amount of correcting him for running away would help him. He was afraid and needed to change his view of the stimulus from terrifying to something positive. This dog loved food and tug so I used both to counter condition him. I started with tug around the trash cans. Once he was good with that. I moved them a little while playing tug. Then I switched to food and started teaching him to investigate the trash can. Which resulted in food and even tug sometimes. Over time, he learned that if he touched the trash can on his own volition he would get a reward. He started seeking them out.

I used this on another dog that was afraid of escalators. Now this dog never did learn to go on them, but by constantly rewarding him for investigating them and going up to them he began to drag his handler to them. They became a source of reward instead of fear.

Now, counter conditioning is not the end all solve all. Some behaviors are deeply rooted and cannot be solved by counter conditioning alone. Teaching the dog to ignore stimulus is just as important as teaching them to investigate stimulus. Determining what stimulus needs to be ignored (dogs on walks for dogs that are leash reactive) and what needs to be counter conditioned and explored (maybe the shady tree stump your dog barks at on your walks) is critical. Dogs with extreme aggression towards a stimulus need professional help. I do not use this method for reactivity on walks. Contact a trainer that specializes in this for more help.

Another TSA security walkthrough is scheduled for February 11, at 10am. Nine Realms handlers are welcome free of charge. I am also opening this to other local teams, however the dog must be almost fully, have a task, and public access ready. Cost for teams I have never met will be $20 as I will assist with any help you may need.
I don’t usually have product recommendations but I really like this bridging half muzzle by Reconk9. I wanted the feel and fit of a leather agitation muzzle with the front missing so I could feed/reward while the dog wore it. Cutting the front off a Baskerville muzzle never gave the same fit as a leather muzzle, this does. It’s a perfect product for muzzle conditioning.
Hard Surface Tracking with Kovacs
Service Dog Faithful the Frenchie alerting to signs of anxiety and thus helping prevent a panic attack. Unfortunately this breed has been poorly represented as many people take their poorly behaved Frenchies everywhere with them. They bark 9/10 times at other service dogs or are just not well mannered. Not Faithful. She is well mannered and actively tasks for her person.
Welcome new service dog in training Manny! He could not decide if he wanted ears off or on for the picture. Manny is an 8month old Golden Mountain Dog (Bernese Mountain Dog and Golden Retriever). He is in training as a psych service dog and has the perfect personality for it.
We have ears! And man is he cute now.